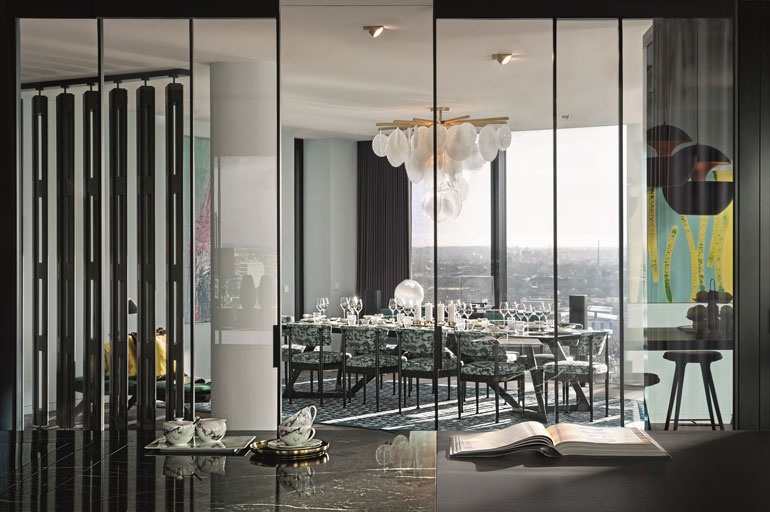 After more than a decade of planning and construction, Herzog & de Meuron’s much-anticipated Elbphilharmonie building in Hamburg is nearing completion and is set to become the German city’s top cultural and residential destination. Earlier this month, local property developer Quantum unveiled a model apartment by Amsterdam-based designer Kate Hume, offering a taste of life inside the mixed-use development’s 45 luxury residences.
The Elbphilharmonie is the signature project of the city’s 390-acre HafenCity masterplan. A disused brick warehouse at the end of a pier jutting out into the Elbe river forms the base for a glass volume with an undulating roofline that contains the apartments, a hotel and the 2,100-seat concert hall, as well as a smaller recital hall, several restaurants and a public plaza. Parking and technical services are accommodated in the original brick structure.
The Hume’s model apartment is located on the 18th level of the building, which dominates the skyline of the redeveloped HafenCity harbor district. Drawing inspiration from its riparian context, and from the Elbphilharmonie’s principle role as a world-class philharmonic concert hall, the interior was designed for an imaginary client: a well-travelled music lover with a passion for creativity and a daring personality. “Investing in a new building in a newly developed part of town is a bit of an adventure,” suggests Hume, seated at a desk next to full-height windows that look down on the harbor, “so the person we imagine living here is definitely something of a trailblazer.”

The apartment’s color palette is dominated by blues, greens and purples that evoke the hues of the river and the changing sky. Hume also introduced metallic accents that reference the oxidized copper roofs of many of the city’s buildings. Curvaceous sofas in the main living area continue the organic aesthetic, while natural stone surfaces and bespoke joinery demonstrate the designer’s uncompromising approach to detailing and customization.
“Music and water were the main influences,” explains Hume. “I also thought about all the activity you see in the daytime. When everything is moving on the water—the tugboats and tankers—it’s like being in a movie.”
Herzog & de Meuron, which was also behind the transformation of London’s Bankside Power Station into the Tate Modern art gallery, is overseeing the Elbphilharmonie’s design, while the city of Hamburg is responsible for project delivery, with Quantum focusing solely on the residential portion. Italian studio Citterio-Viel & Partners developed the interior architecture of the apartments, which are situated on floors 11 to 26 of the building’s glass-fronted western tip.
Hume’s brief from the developer was extremely open and focused on conveying the sort of lifestyle that potential residents might enjoy, rather than providing the blank canvas that real estate sales teams typically prefer. An eclectic array of works by international artists and the inclusion of a high-end audio system with a vinyl turntable help to communicate the concept that this is a space made for entertaining.
“I’ve worked with developers before and they’re usually all about selling,” Hume points out. “That generally means a blander approach, but this project wasn’t like that. I wanted it to be interesting and eclectic, and to bring things to this environment and this city which are unusual and surprising.”
The show apartment celebrates comfort, culture and a direct visual connection with the city. In so doing, it encapsulates the ambitions of its developers and the Elbphilharmonie project as a whole. For Hume, the challenge was to breathe life into an already spectacular space and create the ideal pad for her imaginary occupant. “Sometimes it’s harder working on something that’s already pretty perfect,” the designer points out. “We tried to make a space that feels special and more personal, so in that sense it’s really a flight of fancy.” It won’t be long before the fantasy becomes reality for a few lucky Hamburgers.